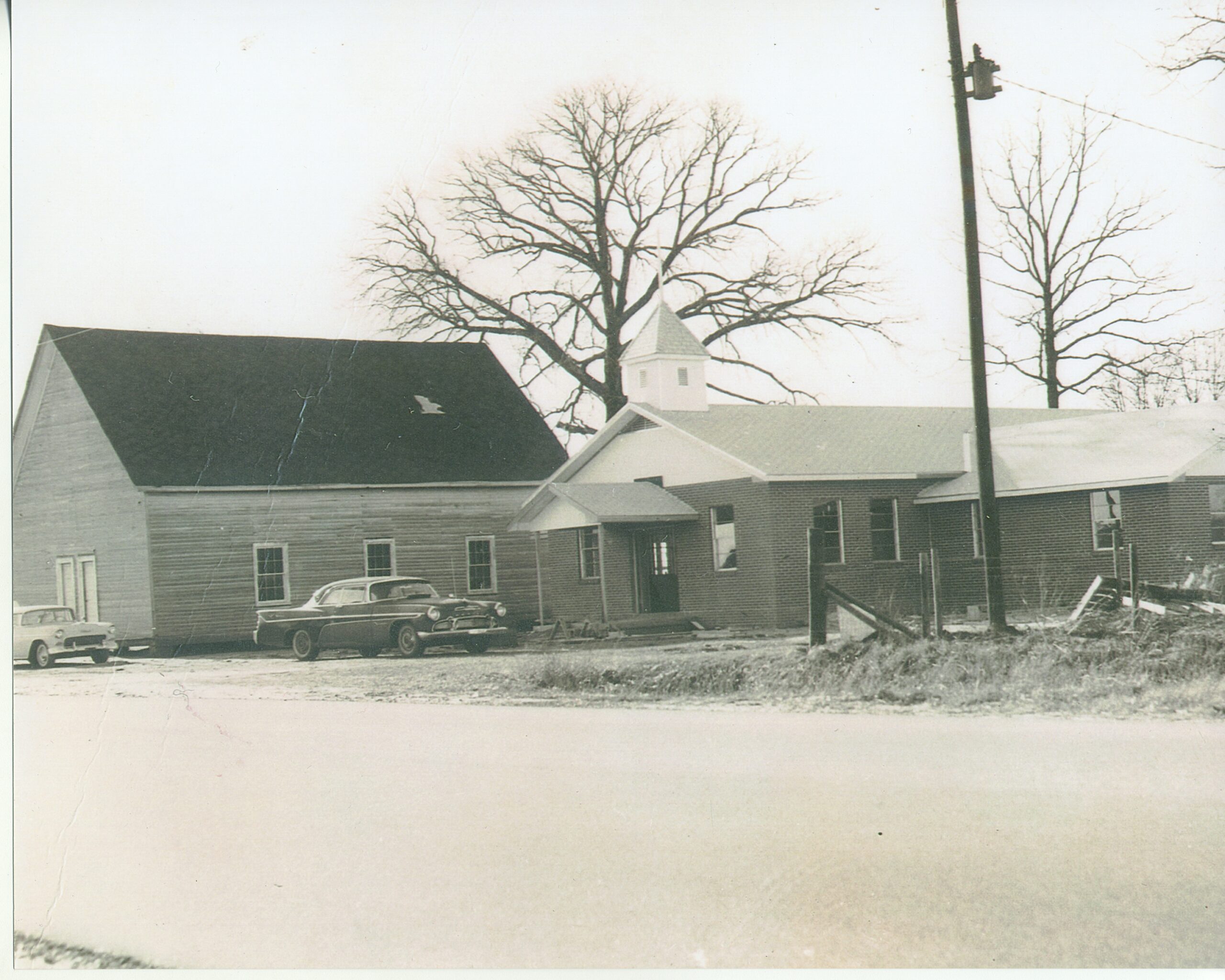 Photo shows the original wooden church erected in 1902 and the beginning of the new brick church which was built in 1962-1963. This brick facility is now used as the social hall and contains offices as well. The wooden church no longer stands.

Macedonia Baptist Church is located on highway 248, Rucker Blvd., about one mile inside the Dale County Line. The church had its beginning in 1900 when P. L. Moseley preached in a bush-arbor in the community. The first building was erected in 1902. It provided a place of worship for the small membership of the Macedonia Baptist Church congregation. The one-room wooden structure was lit by oil lamps and of course had no plumbing. Electric lights were installed in 1940. Moseley was the first pastor, but the details of the organization are not available, as some of the church records have been lost.

Between 1951-1955 the church went from once a month services to twice a month preaching services.

In 1962-63, a brick church was constructed to replace the wooden structure. That building is now used as a fellowship hall, Sunday school room, and office space.

From 1966 until January 1968, the church had a great increase in membership as eighty-two members were received on profession of faith and by letter. Macedonia ranked among the sixty highest churches in Alabama in baptisms during this time.

On July 1, 1966, the church voted to sell bonds to finance the construction of a new auditorium. A bond drive of $50,000 was launched on February 16, 1967, and the issue was completely sold in a week. The building was completed and dedicated in July of that year.

In December 1968 the church presented its first “Live Nativity”, which had continued to be an annual event of the church for 40 + years.

The church entered a building program to construct the rooms that connect the fellowship hall and the auditorium and also the education building that runs beside the auditorium on the west side. In 1984 the church had the “We Love Our Church” campaign, allowing members to pledge funds for the two-story building. Construction was completed in 1985. In December 1985, the church started the Tender Loving Care Child Development Center that allowed Macedonia the opportunity to provide a quality weekday Christian education program for preschoolers and children. Macedonia won all four Sunday school growth awards at the 1985 Association Meeting.

Between 1990-1993 the church offered the “Challenge to Grow” program to raise funds to lower the building debt. On September 14, 1997 we completed the church debt because of all the Christian men and women who had served during the history of Macedonia Baptist Church, giving time, talents, tithes and offerings to make possible the facilities we have today.

In 1999, the parking lot in the front of the church was repaved and a new paved parking area on the side of the sanctuary was completed.

The new steeple was installed on the sanctuary building in February, 2002.

Macedonia is where you connect with Christ and with each other. MBC is God's place for you.